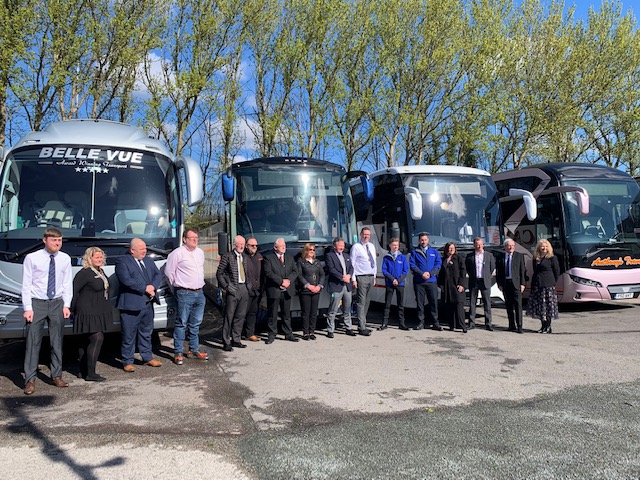 It was also highlighted that coaches played an essential role in school transportation, rail replacement services and the general impact that the sector plays in keeping the UK transport network moving plus the local company support Anthony’s Travel provides for community of Halton.

National Coach Week celebrated the importance of the coach sector to the UK economy, will see a number of events take place, as we highlight its critical importance to the country’s hospitality and leisure industry.

Numerous sportspeople, including former boxing champions Tony Bellew, Carl Frampton, Widnes Vikings Jack Owen  and Tranmere Rovers star Jay Spearing, have also got behind the campaign, showing how coaches are the lifeblood of the sector’s transportation.

Towards the end of the week Anthony’s Travel held an event at their Cormorant Drive operating centre and were joined by a number of prominent North West Coach Operators alongside Chamber of Commerce and Mike Wharton Leader of Halton Borough Council.

Richard Bamber, whose fleet of 18 coaches and minibuses operate from the premises, was delighted:  “It’s a great initiative by the RHA and it’s really picked up momentum as the week has gone on, for social inclusion millions of people rely on coaches each day, every day, its not just a trip to the seaside”.

Also on display was the RHA’s own coach – decked out in National Coach Week livery which throughout the week had travelled the country, starting at the Eurotunnel, visiting Westminster for an audience with the tourism Minister Nigel Huddleston, then onto Wales, The Cotswolds, The North East, Scotland, Yorkshire culminating with a visit to Blackpool for the annual UK Coach Rally

Richard explained: “This has given much needed publicity for the coach industry which is an unheralded but essential part of the UK transport system, you only have to look at the FA Cup semi final where no trains operated  luckily coaches saved the day otherwise the event could not happen, and that’s just one of many examples.”

Rod McKenzie, Executive Director of Policy and Public Affairs, said of the visit: “The first RHA Coach Week has been a great success and really helps us build on awareness of the coach industry, which is so important for wellbeing and leisure.

“The drumbeat has now started, and effectively turns Coach Week into a 365 day campaign for the RHA to fight coaches’ corner.”

Derek Twigg MP was scheduled to attend the latter event but schedule clashes meant this was not possible but is due to the meet with Mr Bamber in the coming weeks. Mr Bamber is also hoping alongside the RHA to meet with metro mayor Steve Rotherham in the near future.

Richard added “Both Mike and Derek have been not only great supporters of Anthony’s Travel and recognise the role we play in the community but have provided wider support for the wider coach industry and have championed the sector within Westminster.  I am extremely grateful for all their support not only for Anthony’s Travel but for the community of Halton in what has been a very difficult two years for everyone”

Find us on social media